9 Signs That You Have An Abusive Wife

In a world where marriage is sacred, and the nuptial bond is assumed to last ‘till death do us part’, speaking up on domestic abuse or even recognizing its signs may be difficult. While women fall victims to domestic violence in most cases, we cannot overlook the fact that men, too, suffer at the hands of an abusive wife.
In a society where patriarchy and gender stereotypes refuse to surrender their thrones, most men do not even realize that they are with a controlling, abusive wife. This article is also for you if you are in a same-sex relationship and face abuse from your wife. Here, we have listed 9 signs that point towards abusive behavior, how you can tackle it, and finally, how to move on if your wife refuses to change her ways. Keep scrolling.

Who Is A Verbally Abusive Wife? 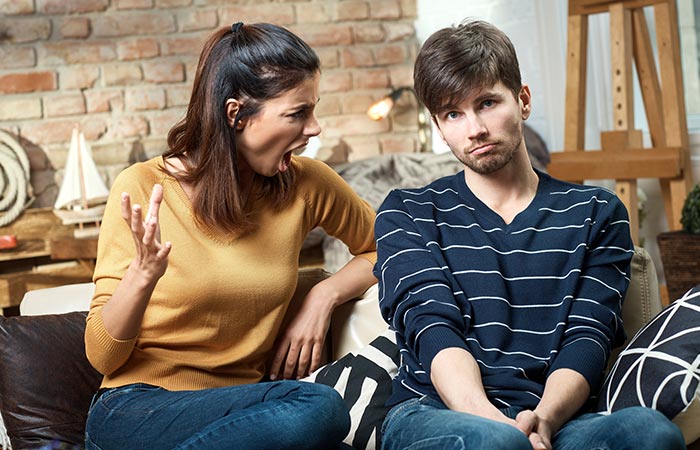 Verbal abuse is when one partner behaves cruelly with the other. From emotional manipulation to hurtful words, verbal abuse is grave and may manifest in several ways. Abused men may refuse to seek support if they have a verbally abusive wife since they are never encouraged to speak about their issues openly. The fear of being ridiculed and judged always lurks at the back of their minds, considering men are supposed to ‘toughen up,’ come what may.

Take the story of the lead singer of Sixties’ pop group The Monkees. Even though there were several proofs of Davy Jones being abused by his third wife, Cuban American actress Jessica Pacheco, he had denied it time and again, covering it up with strings of excuses. Most of the time, men deny such allegations instead of disclosing the truth. As for women in a same-sex relationship, it might be equally hard to open up about it.

If your wife is controlling and abusive, it may take a while for you to come to terms with it. You may not know what to do with an abusive wife, and that is why we have listed 9 signs that show your wife may be abusive to help you understand how to deal with it. Read on.

9 Signs Of An Abusive Wife

If you are confused about whether your wife’s actions qualify as abusive, below is a checklist. You are dealing with an abusive wife if you check off most of these signs. 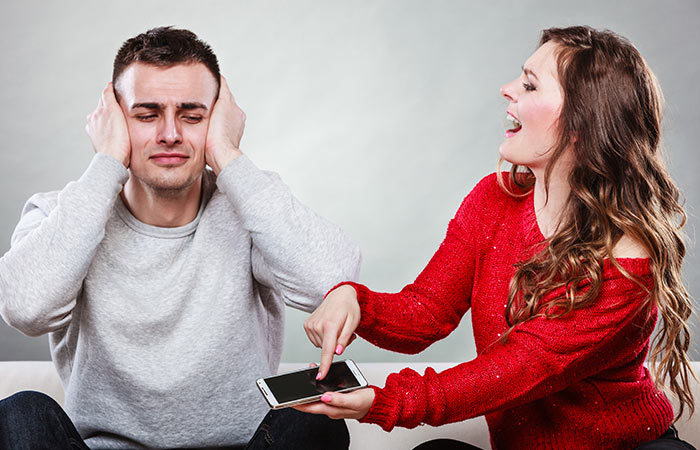 It is common for an abusive wife to manipulate you. From who you meet to where you go and how you spend your money, she controls everything. Manipulation in an abusive relationship may go beyond words, with her punishing you by not communicating normally and even withholding affection from you until she gets her way.

Initially, it may seem like she is concerned about you, but there is a thin line between concern and control. So, take note of her actions. For instance, if she asks you to do something and follows it with, “You will do it if you love me,” it is manipulation.

Yelling when you are angry is quite common in a relationship, but it is not healthy. Verbal abuse may range from screaming to using foul words. You mustn’t walk on eggshells in front of your partner, and if you find yourself doing that, your wife is being abusive to you.

People often act up when drunk, and if your wife is an abusive alcoholic, it is a genuine problem. She can be toxic to your self-image.

While disagreements followed by silence are common in relationships, it is unhealthy for the silence to roll on for days as a punishment for said tiff. So, if your wife ostracizes you after a disagreement, it is a sign of emotional abuse.

Abuse is not limited to words; it is a red flag if your wife inflicts physical violence upon you. It is not always necessary for her to hurt you directly. If she punches walls or throws objects when angry, it is a sign of violence. If she hits you or uses objects to hurt you, the relationship is toxic, and you should consider getting out of it. Seek help from loved ones and open up to them. Don’t hesitate to reach out for help.

Though it is acceptable to have certain expectations from your partner, demanding things that you know they cannot afford is manipulation. This form of abuse is not limited to finances but includes matters like expecting you to do her chores or taking additional responsibilities for her convenience. 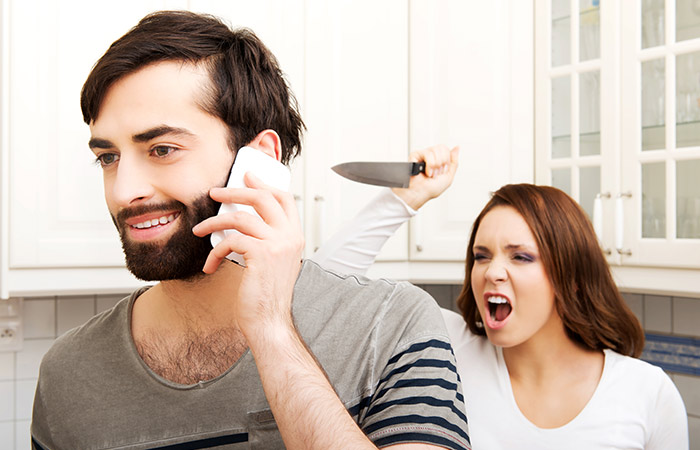 Possessiveness and jealousy are not adorable qualities, even less so when you are married. Trust should be an indispensable part of your relationship. If your wife accuses you of cheating or spending excessive time with others (even though you don’t), it is a form of abuse that negatively affects your mental well-being.

If your wife dismisses your sincere words with an eye roll and makes you feel insignificant, she is abusive. If she discloses personal things about you or the marriage in public, it is because she wants to humiliate you in front of your acquaintances.

Abusive partners often isolate you from your family and friends and want you for themselves. However, in certain situations, it may be a different case. For instance, if you are an expectant parent and your wife wants more attention and care, it is understandable, and you might consider looking deeper into the matter. But, pregnant or not, if these signs have a pattern, you have an abusive wife.

Gaslighting, one of the most subtle forms of abuse, may often go unnoticed in a relationship. If your wife leaves you wondering about your role in the marriage or makes you feel like your worries are baseless, she is gaslighting you.

It requires close attention to identify the signs of gaslighting and deal with them. For instance, it is time to flee if your fault is your fault, and her fault is also your fault. If you are the one who apologizes for everything that goes wrong, even if you were not even involved in the matter, it is a sign of abuse.

Once you are sure your wife is abusive, it’s time to deal with it. The key is to deal with the situation with patience and care. Communicate your concerns to your wife and seek professional advice if needed. Head to the next section for some more pointers on tackling an abusive wife.

Dealing With An Abusive Wife 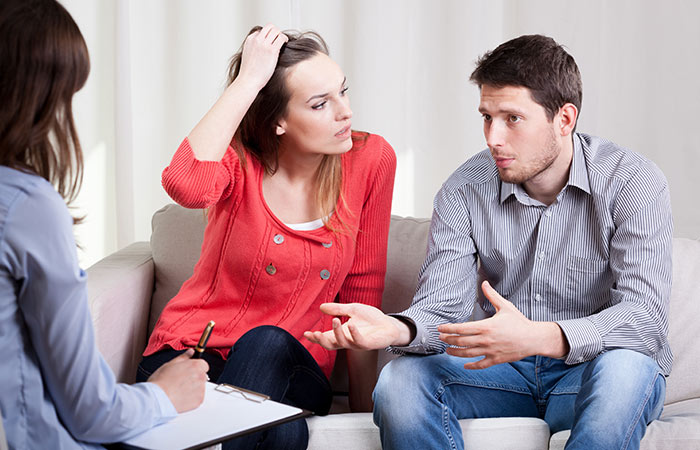 Dealing with an emotionally abusive wife is exhausting. Here are a few steps you can take to ensure that you share your distress with her and work together towards a more respectful relationship:

If you don’t talk about your verbally and physically abusive wife, your well-wishers will not know when to look out for you. And communicating with your wife is equally important as sometimes people don’t realize that their behavior is causing so much trouble to someone.

However, you need to get out of the relationship if your wife fails to understand the problem despite your initiative. You can’t change someone who doesn’t see an issue in their actions.

How To Leave An Abusive Wife 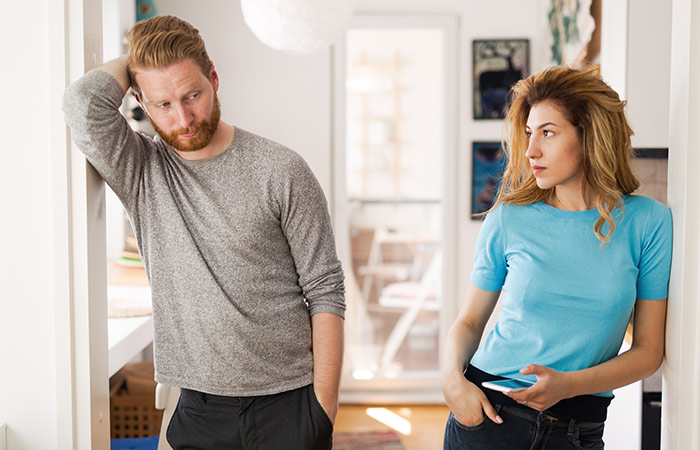 If push comes to shove, it is time to seek legal help. File for divorce and let the toxic relationship go. Separate your finances, belongings, and shared resources. You must look for a safe space, perhaps your immediate family, after you move out. Leaving an emotionally abusive wife is a long and agitating process, so hang in there. Most people miss these behavioral signs of an abusive wife and may initially hesitate to stand by your side. However, do not give up and fight for your rights with the evidence that you have.

On A Final Note

Dealing with a verbally abusive wife may make you question if something is wrong with you. Rest assured, it isn’t. Another person’s behavior has nothing to do with you. Separating from someone you tied the knot with may seem nerve-wracking at first, but it is okay to start afresh and let go of someone who never really valued you. We hope this article helps you look at the signs of abuse and face them with courage. Remember the words of writer Lalah Delia: “If you walked away from a toxic, negative, abusive, one-sided, dead-end low vibrational relationship or friendship — you won.”

The post 9 Signs That You Have An Abusive Wife appeared first on STYLECRAZE.